It has been a while since I put any effort in to this, so let’s try and get it going again!

As a group, we at R.I.O.T.S have decided to all play Stunty for the NAF 2017, and I have decided on Halfling. 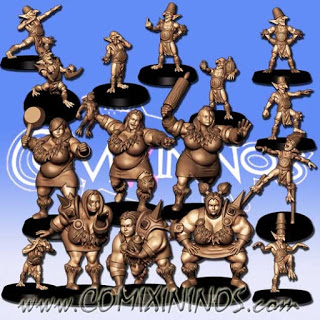 I have a history with all female teams, and I found a great female Ogres Team which fits in with that perfectly! Those Snotlings though, didn’t really do it for me skill wise, as well as the team being limiting, with not many theme options.

I was tempted to try Goblins as a team, but the team I first started Blood Bowl with were Orcs, and I felt they were very similar. I wanted to try something different to what I am familiar with. Goblin teams play differently to Orcs, the focus is different, but why try something slightly different when I can play a team which is completely different!

Going into last years NAF, I played a team I had never used because I pledged to the Sukubus Studios Valkyries team. The aim last year was for us all to take Norse. The team arrived just in time for me to paint and use. It could’ve/not really gone worse….. You can find this team here. My favourite models are the Ulfwerners! They were really satisfying to paint too! Overall the team was quite easy to paint, although mine are still missing a few finishing touches. They need some browns (gloves balls and belts) and gold.


My next plan is to post as I make my “Halfling” team. I have a theme in mind, and I have purchased so ‘Fling-ish models. TBA!