I have decided to try and make some stadium scenery!

It’s definitely a work in progress, using materials I’ve not used much before and trying different methods and ideas to see what works. I’ve yet to actually have an end goal, I haven’t even drawn a plan. I may just do it a4 size, or I’ll trace up a Blood Bowl pitch and fill in stadium pieces around the edge. I just know I have an Orc band and they need a home stadium! Or at least a stadium willing to give them a go..

My favourite part of every thing so far is making the little sandbags with Milliput. So simple and easy to do, with a little stitching and squishing in place, I think they look great.

My least favourite part was trying to cut lollipop sticks. That was so much of my time taken up.

The bricks I’ve got arent really what I was wanting for the finish, I wanted a rougher finish. I had ordered some bricks which I thought would’ve been perfect, but the amount was much less anticipated and they didnt really look like the photo shown. So I am going to rough them up a bit, give them some broken or worn texture. I can always scrap it and start again if it doesn’t go to plan. As if there is even a plan.. 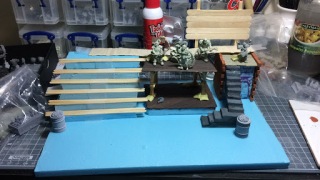 The blue foam I have had lying around for a while, I was going to make a base for one of my many many teams. Never got around to it though, or saw others much better than I could and gave up. But here I am using it! I am considering carving bricks straight into the foam instead of using bricks, but I am not very good with the foam yet. It may be something to try though.

I’m looking at the Blood Bowl game on the xbox one for some inspiration too, I can’t seem to find much on the web as far as other people doing what I am trying to. I have found pictures of finished stadiums and such, but I want some in depth close ups really!