So, last Friday we sat down to play our first try of Dragon Age, the RPG. Rich initiated this new campaign and had already provided us with our own starter packs and character markers. 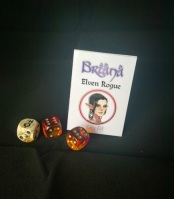 I knew what I wanted to be, fitting in with every other game which gives me an option of choosing to be an elf ranger/rogue. I was a city elf rogue. I wanted to be a Dalish Elf, not one of those flat ears, however Richie suggested a city Elf to start this campaign, as the people we would be associating with in this campaign would either fear me or try to shoot me in the face straight off.

I personally love everything Dragon Age. I started on DA2 and am playing Origins now, and have read all the books. Other people on the team have played and others are not fans of the franchise. The usual DM, Steve for example doesn’t like DA and so didn’t really know what he wanted to be. Trying to explain so much, is hard. He ended up being an Elven Apostate. Thinking about it, I may as we’ll have been Dalish, running around with an apostate….. We also had a Human Warrior and a Dwaven Merchant. Lamby was the Dwarf, if you saw him, it would make sense. And he had no idea about the game. So explaining that as a surface dwarf, he was the lowest of the low, and the dwarfs are scared of the sky as they believe they can fall up! Gavin was our warrior, again if you saw him.. Warrior wise.

So our tale starts as four mercenaries meeting for the first time, introducing ourselves as much as we felt was necessary. Myself as a City Elf, daughter of servants following their masters. There was another Elf being very secretive and mysterious, with his hood covering much of his face. The human warrior appeared to be an arrogant fool, brandishing his Bastard Sword. I dodged out of the way in case he chopped my head off. The dwarf was as surly as most dwarfs, but the most interesting of the three. I have met a rare few surface elves and this was a great chance to understand the race.

We were met by Alenka, a circle Mage hired by the Arls’ steward. She pushed open a rain swollen and a gold sovereign fell from her pocket from the effort. Who walks around with loose change? I am aware of my own disgusting nature, but that seemed to convenient to me. The dwarf however quickly picked up the coin and returned it. I am sure I noticed a look of disappointment flash across her face, as she flattered the dwarf in thanks. Guess that’s a companion to be aware of.
We were led to a stocky, grumpy looking man putting on an armour made for someone 20 years younger. So when it didn’t fit and cut his skin he backhanded the elf trying to make it fit across the face. If this man wasn’t important to my payment I felt I would have hurt him deeply. The treatment sent me back to the years trailing around behind humans. Again, the dwarf steps in a helps the servant up from the floor. Odd behaviour for a dwarf.
Invading his land were darkspawn. Disgusting rotten smelling things they are, And a lot tougher than me. In the midst of this trouble were his children and he wanted us to retrieve them. 50 pieces of silver each for two days work. We tried to convince him this task deserves more money, but we failed miserably. I almost thought he’d fire us. He provides us with some travel items and we are led out. On the way we meet the mother, who obviously apologises, blames his manner of the situation. She offers us a piece of gold, what is with all these single gold sovereigns. The human, hooded elf and I, all decline, and the dwarf keeps all to himself. Alenka seemed to be interested in the dwarf and his gold piece.
So the four of us an Alenka set off on our journey to rescue some children on their interrupted holiday. For some reason, the Mage equips herself with rock armour. Should we be expecting some trouble already?